The Daily Signal – With consumer confidence at a 17-year high and economic prospects looking relatively strong, congressional Democrats have taken to grousing about the gas pump as a midterm strategy.

If this is true, then why have Democrats spent the past two decades advocating policies that artificially spike fossil fuel prices? If higher energy costs hurt Americans—and thank you, senator, for conceding this point—why have liberals favored increasing gas taxes, inhibiting exploration for fossil fuels (including a ban on fracking for less environmentally damaging gas in a number of places), and capping imports?

If higher gas prices disproportionately impact the working class and poor, then why do Democrats push for national schemes designed to create false demand through a fabricated marketplace? 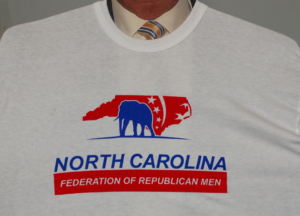 This Russell Athletic T-Shirt is all white and is 50% cotton, 50% polyester with beautiful blue and red artwork.

California has become a one-party state in a short amount of time.
Its example is a warning to America—not a guide.

#1 reason: Open Primaries… Never forget this as you hear the sirens sing!

“The middle-of-the-road policy is not an economic system that can last. It is a method for the realization of socialism by installments.”
— Ludwig von Mises
Click here to read: Middle-of-the-Road Policy Leads to Socialism
ATTENTION MEMBERSHIP
THE HCRWC MAY LUNCHEON HAS BEEN CANCELED!!
Henderson County Republican Women’s Club May Luncheon Meeting Has Been Canceled!!!
Friends, due to the unexpected death of Senator Chuck and Teresa Edward’s son Chris, this month’s luncheon has been canceled!! His service is Tuesday, May 22nd , 2PM with visitation from 12:30/1:45 at The Chapel, Thos. Shepherd Funeral Home on Church Street. For more details you can go on line at Thos. Shepherd and Son https://www.thosshepherd.com/obituary.
We will carry all checks over to next month’s luncheon. Please RSVP that you received this message and please keep the family in your Prayers.
Respectively,
Doris Hawkins
HCRWC President 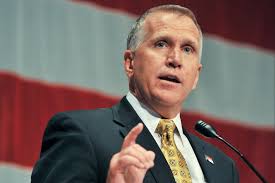 Click here to read about: Fighting for Pastor Brunson’s Release, Additional Funds For Hurricane Matthew Recovery, and Taking Care of our Veterans.

James Comey has recently embarked on a media blitz to “tell his story” and sell his new book. Perhaps, instead of cashing in, it is time for the former FBI director to come before Congress and clarify some of his previous troubling comments that don’t seem to square with the evidence.

Question 1: Did Comey and his FBI improperly coordinate with former Attorney General Loretta Lynch and the Department of Justice during the height of the Clinton email investigation?

On July 7, 2016, Comey testified under oath before Congress, following his public statement in which he recommended against referring Hillary Clinton for prosecution to the Department of Justice for her use of a private email server while she was secretary of state. Comey said the following:

I did not coordinate that (statement) with anyone. The White House, the Department of Justice, nobody outside the FBI family had any idea what I was about to say. I say that under oath. I stand by that. There was no coordination.

There is a growing body of evidence that Comey misled Congress with this claim.

For example, texts exchanged between the FBI’s Peter Strzok and Lisa Page demonstrate Comey added language assuring there was “no coordination” between the FBI and DOJ following the public scrutiny created by the infamous tarmac meeting between Lynch and former President Bill Clinton. The DOJ was so involved in the steps the FBI had taken to wrap up the Clinton email investigation they provided language to articulate the investigation’s findings and case law the FBI used to support their conclusion. Documents produced to Congress also demonstrate the FBI and DOJ met frequently to discuss developments in the investigation. These facts suggest significantly more coordination between the FBI and DOJ than Comey originally testified about.

Question 2: Why did Comey leave out pertinent facts when he briefed then-President-elect Trump on the Russian dossier?

According to his own memos, Comey briefed Trump in January 2017 on the Russian dossier. Looking at Comey’s memos, it appears he failed to mention the FBI had already terminated their relationship with the author of the dossier, Christopher Steele, for failing to “maintain confidentiality” after he had leaked sensitive information to the media. This made Steele an unreliable source by the FBI’s own standards. Conveniently, Comey also neglected to tell the president about the dossier’s origin as a campaign opposition research project, funded by the Democrats and Hillary Clinton’s campaign.

If this briefing on the dossier was truly in the president’s interest, as Comey claims, then it’s certainly curious as to why this information was not shared.

Question 3: Did Comey and James Clapper coordinate to give the Russian dossier credibility and leak its contents to the media?

In the January 2017 briefing, Comey told Trump news organizations “like CNN” had the Russian dossier but were looking for a “news hook” to report on it. Remember, while no outlet had published anything on the dossier to that point, it conveniently took less than a week after the briefing for the dossier’s allegations to become public … via CNN.

This raises the question: Did Comey and then-Director of National Intelligence James Clapper work together to organize the dossier briefing for the purpose of giving CNN what they wanted — a “news hook”?

Months after the briefing, Comey testified under oath the dossier was “salacious and unverified.” Documents produced to Congress demonstrate FBI officials raised concerns related to the legitimacy of the dossier. The timeline and evidence we have for this time period suggests, yes, it was Comey and Clapper who held a briefing with Trump on a “salacious and unverified” dossier, approached the media with the details of that briefing, and provided cover (a news hook) for reporting the allegations.

Question 4: Why did Comey fail to mention he had secretly hired his friend, law professor Daniel Richman, as a “special employee” of the FBI?

Comey testified before the Senate Select Committee on Intelligence and claimed he asked “a good friend” and “professor at Columbia Law School” to provide the contents of one of his memos to a reporter. Congressional investigators now know Comey misled the public with this testimony, since he had quietly hired this same friend, professor Dan Richman, as a “special government employee” of the FBI to work on “special projects.” Comey did not have any other special advisers from the outside hired as special government employees.

That Comey would offer a special job and give a high-level clearance and full access to his friend, when there are 35,000 employees at the FBI, is odd, and certainly relevant. Why did he fail to tell the public about this?

Question 5: Did Comey give his memo to anyone else?

If Comey gave his memos to a personal friend he had hand-picked as an FBI “special employee,” the question becomes: How many other people did he give these memos to?

Congressional investigators have received information that Comey may have misled the public on how many people he shared his memos with. If so, it is Comey’s responsibility to the public to come to Congress and correct the record by answering whether he truly gave this information to only his friend, as he testified.

Comey owes the American people far more than a public relations tour, a few memos, and a new book. He owes them the truth. It’s time he comes before Congress and gives it to them.

Come have breakfast with us. And stay to listen to our guest speakers.  We meet the fourth Wednesday of each month at the Dixie Diner, 1724 Brevard Rd, Hendersonville, NC.

April 19th Thursday Early Voting Begins at Board of Elections

Contact Your Elected Officials By Using The Following Site